Country of the month: Japan

The idea of ancient festivities and traditions may seem at odds with Japan; an advanced, almost futuristic society in which the world of technology and industry is prospering.

However, what makes this country so remarkable, is despite their attitude to modernity, the people of Japan still regard their ancient customs as sacred and continue to practice these customs throughout the year.

Throughout this month, Japan shows that they know how to celebrate, showcasing some of the most spectacular festivities in the world.

What’s going on in May?

Ukai is a 1300-year-old, traditional way of catching small trout using Cormorants (a small seabird). The master Cormorant trainers don ancient costumes and sail out into the river controlling between 10 and 12 Cormorants at a time, you can watch this amazing display from your own small boat where you will be served dinner and sake.

This event takes place every evening between the 11th of May and the 15th of October except during the full moon or heavy rainfall.

Named Aoi (Hollyhock) after the leaves that are worn by the participants, this is a procession of some 500 people who wear ancient costumes and makeup. This is a representation of officials delivering the emperor’s message and offerings to the shrines of Shimogamo and Kamigamo.

The highest honoured position is that of the messenger who rides horseback while carrying a golden sword. Look out for the imperial princess, the lucky lady who has been selected from all unmarried women living in the Kyoto area.

The parade of people leaves the Kyoto Imperial Palace at 10.30, makes one stop at Shimogamo shrine and then arrives at Kamigamo shrine around 15.30 where there are dance performances and horse events.

This is one of Tokyo’s most famous festivals, and one of the largest festivals in Japan. Interestingly the biggest celebrations are organised specifically on odd numbered years, i.e. 2015, while the celebrations organised in years that end in even numbers are on a smaller scale.The people of the Kanda district were known to be very high-spirited so this celebration tries to recall some of this energy and the fun atmosphere.

On Saturday, 16th May, a huge parade takes place with over 300 people marching through the districts of Tokyo, followed by various floats and mounted Shinto priests creating quite a spectacular sight.

On Sunday, 17th May, 100 different sized portable shrines are brought together from the different districts. This is certainly a sight to behold.

Mifune Matsuri is not your average boat party, it is actually a festival which has been recreated from a similar boat celebration dating 1000 years ago. After midday, 20 boats make their way out into the Oigawa river to begin the festivities. The boat drivers proudly wear very colourful costumes and the boat heads are decorated to look like the heads of dragons and birds.

Each boat has its own theme, with one given the responsibility of music and another filled with dancers for example. A multi-coloured array of Sensu fans float on the water adding to the exuberant display of sights, sounds and sensations.

Takigi O-Noh is a traditional musical drama held on an open air stage lit entirely by bonfires outside the Kofukuji temple in Nara. Believed to have originated in 869 AD it was originally performed when sacred Takigi (firewood) was delivered to the temple. The Noh actors wear lacquer-coated masks and fantastic costumes while performing through means of song and dance. During the interval, you may get the chance to see a traditional comedy drama.

Tickets can be purchased from the Nara city sightseeing information centre and cost 3,500 yen for a 1-day ticket and 5000 yen for 2-days. Get there early to have the best views!

The highlight of this festival is the procession of 1000 Samurai warriors, recreating the funeral march of Tokugawa Ieyasu, the founder of the Edo dynasty and one of the three Shoguns.

The march begins from Futarasan shrine led by three portable shrines each dedicated to one of the three Shoguns. These are followed by mounted Shinto Priest and then by the Samurai warriors clad in full armour. The march is very sombre and really emphasises the dignity of Samurai. The procession ends at Toshogu shrine where there are ancient court musicians, dance performances and Samurai archery competitions. 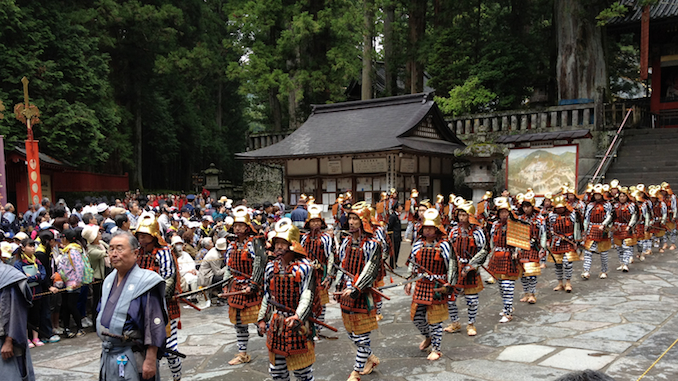 This 1,200km trip can be taken at any point of the year, but it is recommended between April and May when the weather is the most accommodating. The Shikoku Pilgrimage is a Buddhist pilgrimage around the island of Shikoku visiting 88 temples along the way.

This is undertaken by hundreds of thousands of people every year and while most people travel by bus tour the most traditional way is to take this trip on foot. Roughly it takes between 40-60 days to complete the full walk and is recommended for the spring time as the weather is not too hot or cold.

The pilgrimage involves visiting the 88 temples that are said to be founded or restored by Kōbō Daishi, a famous monk who started the Shingon sect of Buddhism in Japan. Pilgrims can be spotted by their byakue (white coat), sugegasa (conical straw hat) and kongōtsue (walking stick).

Japan has a fascinating and long history. They have some of the oldest standing traditions and festivities in the world. You can find more information about the festivals in Japan for the rest of the year by visiting the Japan National Tourist Organisation.

Planning to move to Japan? Check out our country guide