New Year celebrations around the world 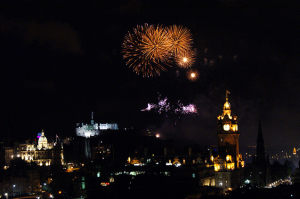 The New Year signifies different things to different cultures, and most countries around the world have their own unique way to close the curtain on one year and look forward to the next. Here is a look at some of the traditional ways to bring in the New Year from around the world.

Arguably one of the (if not ‘the’) most famous New Year’s celebrations. Scotland’s annual four day Hogmanay festival has earned it a reputation as the place where the world goes to party at the end of December.

Aside from the obligatory rendition of Auld Lang Syne and Edinburgh’s infamous street party, Scotland also has the New Year’s tradition of First-Footing. From midnight the Scots open up their houses and as history has it, the first person to pass the threshold on the 1st of January must bring a gift. In true Scottish fashion this is usually in the form of whiskey or shortbread. What’s more, if the first person is a dark-haired male this signifies good luck for the coming year.

Nochevieja (lit. old night) is a serious affair in Spain and it would seem the whole country takes to the streets on December 31st. The celebrations are centred around the gathering of thousands of people in Madrid’s Puerta del Sol, with the clock of the Casa de Correos responsible for officially bringing in the New Year. This is broadcast on television with the majority of Spaniards tuning in at home.

The most well known of Spain’s New Year traditions is the eating of 12 grapes, one for each of the 12 chimes of midnight with the hope they will bring 12 happy months in the year ahead.

A more unusual New Year tradition in Spain is the wearing of new, red underwear on New Year’s Eve; which is thought to bring good luck. The underwear, however, must be bought as a gift.

Celebrations in the Philippines usually involve a lot of noise, in order to scare away evil beings.

The number twelve makes another appearance here, with twelve round fruits being eaten to ensure good luck for the forthcoming twelve months.

And don’t forget to dress appropriately, anything with a circular pattern will do, though polka dots are a favourite among the locals.

New Year’s Eve marks the official beginning of the summer holidays in Brazil, so the party is understandably a riotous affair. Brazil’s cities of Sao Paulo and Rio de Janeiro are awash with street-parties and firework displays.

If you’re seeing in the New Year on the beach it is customary to dress all in white, thought to bring luck.

Lentils are commonly eaten and are meant to represent coins, and therefore thought to bring prosperity for the New Year. They are usually made into a soup served on New Year’s Day.

Some of the strangest New Year traditions are to be found in Denmark. There is a long upheld custom of smashing old crockery, which is ideally thrown at the door of a family member or friend.

The Danes also literally jump into the New Year, by jumping off chairs in unison at the stroke of midnight.

Although rather unglamourous, pulses and lentils also feature in the New Year celebrations in America. Black eyed beans are made into a dish known as ‘Hoppin’ John’. There is an old adage that states, ‘Eat peas on New Year’s day to have plenty of everything the rest of the year.’

Similar to Big Ben in the UK, the celebrations across the USA are focused on Times Square in New York. The New Year ball begins its 60 second descension from the roof of 1 Times Square at exactly 11:59pm, the New Year officially beginning when it reaches the ground.

Known as Oshogatsu to the locals, New Year in Japan, unlike Christmas day, is a public holiday on which no work should be done.

A popular custom in Japan is sending New Year cards, and if correctly postmarked the national post office will guarantee that they are delivered on the 1st of January itself.

On New Years Eve, it is traditional to eat long soba noodles at midnight, believed to symbolise longevity. The Buddhist temples bring in the New Year with 108 strikes of the gong, which signify each of the 108 human weaknesses thought to result in wrongdoing.

So wherever you are to welcome 2014, enjoy the local way of bringing in the New Year!