According to a new study from the German expert association for integration and migration, more than 180,000 qualified workers have left Germany since 2003.  One of the most affected sectors is the medical sector: in 2008 alone, more than 3,000 highly qualified doctors have left the country, some 19,000 German doctors are now working abroad. At the same time, there is an increasing shortage of doctors in Eastern Germany.

The social cost of the brain drain is enormous: Since most German emigrants are young and highly qualified, the state loses billions in tax revenues according to the experts. According to their calculations, the lost tax revenue of an emigrating doctor amounts to more than one million Euros over the rest of his lifetime, a qualified worker costs more than 280,000 Euros in oportunity costs. Even if only one third of emigrated doctors stayed abroad, the tax loss of these workers alone would thus amount to more than one billion Euros.

At the same time the experts criticize the complicated bureaucratic procedures for recognizing foreign qualifications in Germany. According to them, many highly qualified immigrants in Germany cannot work in their chosen profession since their degrees are not recognized. The experts are therefore demanding a rapid restructuring of the German immigration system with special incentives for attracting qualified migrants. 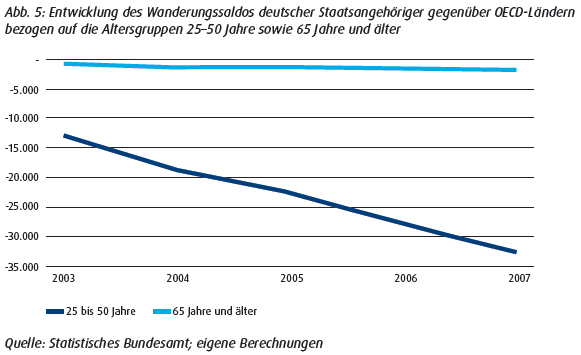