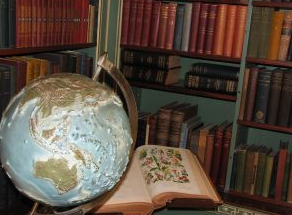 This week saw the glorification of books as celebrated by World Book Day on 7th March.

Just Landed has decided to join in the literary applause and take a look at some of the best travel and expat novels out there. If you disagree with the list, or have any other recommendations then let us know why you think your favourite book deserves a place on Just Landed’s best expat/travel novels list. Let’s get a worldly discussion of words going!

We begin our voyage into the best expat novels from the start, when travelling still had a certain romance to it, unlike nowadays, where even on a hike you will be in stumbling distance of a motorway.

The journey begins in 1933, just as Hitler came to power. The novel details a constant fragile paradox between the author’s sophisticated language with his innocence of pre-World War Two Europe. A Europe when you could go door-to-door being welcomed by hospitable strangers willing to take you in. A Europe where nature was undestroyed. Fermor’s plentiful language will guide you through every last blade of grass in a world forever lost.

The list of these intoxicated travel authors of the Beat Generation is endless. Kerouac’s On the Road is the obvious choice, alongside Hunter S. Thompson’s good-bad Hemingway style novels. However, there is an expat novel out there which revels in utter bohemian decadence.

A Moveable Feast – Ernest Hemingway
This memoir-style novel will transport you to Hemingway’s little 1920s piece of Paris where you will be invited into the Lost Generation, meeting characters such as the Fitzgeralds and watching the world go by from Hemingway’s alluring Parisien Café point of view.

Hemingway depicts himself as an impoverished artist, struggling to survive in a stylish community. He does not just struggle with moving to a new country, the writer portrays his transition to becoming a great writer and how writing should be performed, that is an accurate portrayal of truth, no matter how ugly. And it does get ugly. Sadly, it has surfaced that when writing these memoirs, Hemingway was not as impoverished and starving as his descriptions state.

Expat life can have its tough moments and a cheery novel by someone who knows what you’re going through can sometimes be just what you need.

Driving Over Lemons: An Optimist in Andalucia – Chris Stewart

This former Genesis drummer decided to leave his rock-star lifestyle to become a sheep shearer and travel writer based in Andalucia, Spain. Driving Over Lemons recounts his own story set in a remote valley in Andalucia. There, he bought a peasant farm without water, electricity and even a nearby road.

As you can imagine, the story is far from the usual British expat story on the Costa Blanca and his heartfelt and sometimes odd meetings with local farmers, New Age travellers and artists show his deep content for this rural lifestyle. Where most in this situation would run back to Blighty, the author’s cheery optimism about the hassles of a simple Andalucian life is what makes it a dazzling read.

Travel writing is a male dominated category, unless you want to include Eat, Pray, Yawn… I mean Love. There are a few female travel novelists that did have other things to talk about than food and romance.

A Winter in Arabia: Travels Through Yemen – Freya Stark

A Winter in Arabia describes the travels of Freya Stark in the 1930s through Hadhramaut, a region in today’s Yemen. She was the first female to travel this area alone and her depictions of the Middle-East offer a rare peek into the luxuries and hardships of the Muslim peninsula before it was opened up to Western societies. She illustrates the people she meets along the way with a sympathised understanding of their culture in rich detail, such as the little girls in magenta silk trousers, silver frilled with bells around their anklets.

She also includes snippets of her own feelings of isolation or joy as a constant traveller. She was not a female writer trying to be a boisterous Hemingway-type, as she once said ‘There are few sorrows through which a new dress or hat will not send a little gleam of pleasure, however furtive.’

The list of sci-fi and adventure novels list is as long as the tales are old. However, there is one familiar fantasy travel novel that stands out amongst the rest.

This novel is more of a misadventure than a real adventure, as the protagonist is washed up on the island, Lilliput, and greeted by the 6 inch tall inhabitants and then thrown into the rescue of a 72 foot tall farmer.

He travels to other islands, meeting various races and interesting characters only to realise, in true Swift style that, he would prefer to reside amongst the intelligent Houyhnhnm horses than the vile human race. The novel surpasses the imagination and takes you on a satirical adventure suitable for kids and adults. It is an stimulus for reckless travel which has inspired throughout the ages.

Do you have a book you want to add to our list? Let us know your thoughts!