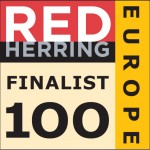 Red Herring today announced that Just Landed was named a Finalist of Red Herring 100 Europe, an award given to the top 100 private technology companies based in the EMEA (Europe, Middle East and Africa) region each year.

The Red Herring 100 is one of the most prestigeous awards for technology startups worldwide. Companies like Google, eBay, and Skype were spotted in their early days by Red Herring editors, and touted as leaders that would change the way we live and work.

“This year’s impressive list of submissions from companies demonstrates Europe’s growing role as a major center of innovation in the global technology sector,” said Red Herring Publisher, Alex Vieux. “The exceptional accomplishments of European technology startups and entrepreneurs are a testament to the rapid advancements being made in building the European innovation ecosystem.” Red Herring’s editorial staff rigorously evaluated several hundred private companies through a careful analysis of financial data and subjective criteria, including quality of management, execution of strategy, and dedication to research and development.

Red Herring will honor the Red Herring 100 Europe Finalist companies at its Red Herring Europe 2009 Conference, scheduled for March 31- April 2, at the Berlin Radisson Hotel. The event will explore how European firms are leading the charge in many technology sectors, gaining a competitive advantage, and driving entrepreneurial success in ways that create business opportunities for challengers and incumbents alike.