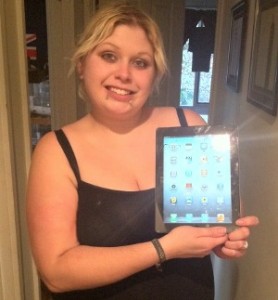 The Expat Banking Poll has officially come to a close.

Lucky Australian Alison Richards, who has been living abroad in Germany, was over the moon to find out she was picked as the winner of a new iPad2.

Her comment about her frustrations with banking abroad was one of many from expats contributing to The Expat Banking Poll, a social campaign sponsored by Lloyds TSB International.

Alison commented, “Being able to understand what banks abroad are saying can be quite tricky, especially when there was a problem with the chip in my card, as there was with many others.

“And when I chose to close my account they “lost” 200€! Then, after investigation, I was told this was due to a “chip error” that occurred on New Year’s Eve. I have never experienced this back home. So no trusting German banks for me!”

She later added, “I was delighted to have been picked as the winner. I’ve been so busy downloading apps and playing with it! My favourite apps are Angry Birds, Words with Friends and Photosynth.”

Get involved in the expat banking debate

While there is no longer an iPad on offer, the Expat Banking Poll Facebook page still has a lot to offer.

The information we have found so far is fascinating, and we plan to find out more. For example, the poll has so far revealed that as many as 59% of people living abroad completely trust their foreign banks. And that in Spain, 64% of expats do not trust Spanish banks “at all”.

In fact, we found the discussion so interesting, we’re going to continue posting regular questions, useful links and will also get involved in the conversation ourselves. And if that’s not enough, there will be regular articles about expat banking on Just Landed’s Expat Wealth blog – a great source of news and features on finance for foreigners.

And we’re not the only ones who’ve been enjoying the debate. Results from the poll have attracted a lot of attention from sites owned by big financial brands such as The Wall Street Journal and Yahoo! Finance, as well as British newspaper The Telegraph.

So join more than 1,000 (and counting) expats who completed the poll and have submitted their comments on banking abroad. We want to know what you think!

Very isghnitful post. No. 1 and 2 did strike a chord with me as these are, in my experience,the most difficult situations to cope with. The rest are easier to deal with, maybe except red tape, but since I’m from Argentina, I’m used to it!