Everybody’s experiences of moving abroad are different, but no matter where you are in the world or why you’re there, one thing is for certain – you’ll definitely run into these five types of expats.

The Veteran will be your rock when you first arrive. Whether they’re a serial expat or have lived in your new city for so long they’re practically a local, they can offer you plenty of advice.

You’ll find the Veteran chilling in a quirky coffee shop with a good book and a knowing look on their face -they know everything from visa procedures to the best beer.

You’ll think you’re annoying them with your constant questioning, but you probably just remind them of themselves. And if you think they’re a little jaded, it’s only because people keep leaving and they’re still here.

Don’t be fooled by their helpful advice on your first meeting, the Study Abroad Expert is not to be trusted. This is a person who spent a semester abroad and came back upon graduation to spread their wisdom.

You might be impressed by their knowledge, but you’ll soon realise it all came from Wikipedia. Luckily, once they calm down a bit, the Study Abroad Expert can make a useful friend. You’ll mostly find them in Facebook comments, offering advice to people who’ve lived their three years longer than them.

The first form of the the Study Abroad Expert, the Erasmus Student is still living in that aforementioned bubble. If you’re a working expat then your paths won’t often cross – unless you find yourself doing shots at 2AM on a Wednesday morning.

The Erasmus Student is a great expat to have in your arsenal for a fun night out, but don’t expect to ever see them before noon. The downside of befriending a student is that come June, they’re gone, and you have to start the whole friend process again. 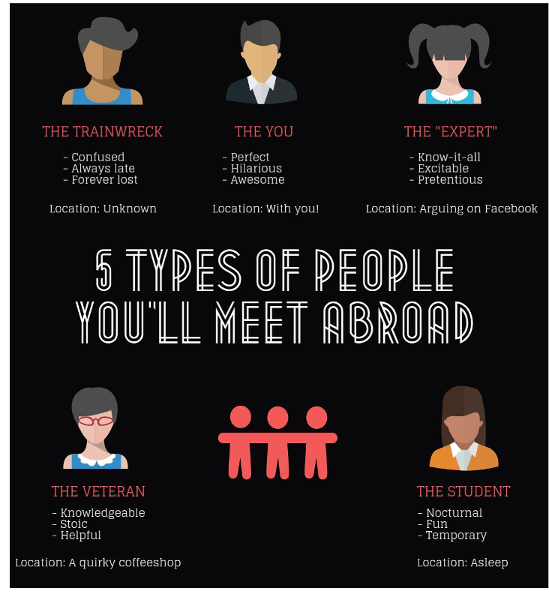 Most people who move abroad will tell you it’s a tricky process, but no matter how hard it gets, you can figure it out. Enter the Trainwreck: the posterchild for why you shouldn’t leave your parents’ house.

The Trainwreck doesn’t mess up legal jargon or fumble with the language – because those are all perfectly reasonable expat mistakes. No, the Trainwreck is someone who can’t figure out how to use a bus or buy a sim card. Someone who you look at and ask “how did you even make it onto the plane?”

You’ll probably find the Trainwreck… well, we don’t know because they got lost three days ago and no one’s seen them since.

You’re gonna meet a lot of people abroad; some will stick and some won’t. But whether you bond over similar backgrounds or TV preferences, you’re sure to find The You. And eventually you won’t even care about the other four types of people.

If you’re looking to find the You, they’re probably waiting at your favourite bar, but if you haven’t met them yet you can read our tips on meeting new people abroad here.

Rosy Parrish grew up in Britain and now lives in Madrid. She divides her time between teaching English, writing about expat life, and befriending dogs in the street.