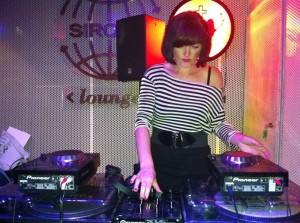 “I live in the Antón Martín neighbourhood and I love its arty, laid back vibe.”

In the March edition of our expat interview series we hear from Laura Stephens, a British expat now living and working in Madrid, Spain.

Easy one to start, tell us about yourself!

I moved to Madrid three years ago and started working in a bar. After a year and a half I trained as an English teacher with Vaughan Systems, and teaching is what I mostly do now.

I used to write for InMadrid, the biggest English language publication in the city. Sadly due to the economic crisis the paper folded just before the summer, 2013, and I really miss it! I’m also Truckin’ Laura, a Country, Rockabilly and Rock ‘n’ Roll DJ, and I sometimes play at the Rock ‘n’ Roll club night Viva Las Vegas.

Why did you move to Spain?

I was co-managing, and living above, a pub in North London with a girl from Madrid. We got on really well and had a lot of fun. When she decided it was time to return home I decided to go with her! I had visited Madrid a couple of times and fallen in love with it, and the idea of living in the city in which many of my favourite artists and writers had lived seemed very romantic and exciting. I had always wanted to learn another language and it was a moment in my life in which I wasn’t tied to anything; I had no boyfriend, no mortgage, I wasn’t climbing a career ladder as such and most of my friends seemed to be marrying off and reproducing. It was a ‘what do I have to lose?’ moment.

Madrid is a fantastic city! It has all the culture, nightlife and vibrancy of a capital city while managing to retain a small town atmosphere. I live in the Antón Martín neighbourhood and I love its arty, laid back vibe. It’s still quite rustic and has lots of cool little bars and shops all doing their own thing.

I miss my friends and family. But I moved to London from Norwich when I was 18 and stayed there for 15 years so I’m used to missing people! The world is a lot smaller with the Internet and I’m lucky that the UK is just a short hop and jump from here. Apart from friends and family the thing I miss most is the availability of vegetarian food. Being veggie in Spain is hard!

The above! I don’t always want to go to a vegetarian restaurant (and I doubt any of my Spanish friends would go anywhere where there wasn’t a pig leg hanging on the wall), but I get sick of my choices being tortilla or a plate of cheese, as much as I love both those things! And often waiters will look at you like you’re crazy when you ask for something without meat or fish. We are a rare and misunderstood breed in the Iberian Peninsula.

The time I said ‘polla’ instead of ‘pollo’ to my friend’s mum. I’ve made similar rude mistakes countless times, and continue to do so. Occasionally a memory of one of them pops into my head and sends a shiver of shame through me. 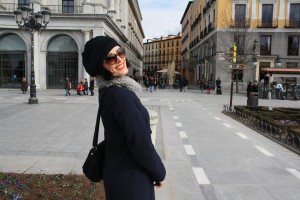 “I would consider moving to somewhere nearer the sea”

I’m always a little restless and I have quite a lot of wanderlust. I’d love to live in the States for a bit but it’s very hard to get a working visa. I love Madrid and am happy here. I would consider moving to somewhere nearer the sea but things are tough in Spain at the moment so finding work would be a lot harder.

The language. I moved here knowing just a few very basic sentences and for the first year and a half I was working in the bar and only mixing with Spanish people. Most of them knew very little or no English which was hard but also forced me to learn Spanish. I found it very frustrating not being able to communicate in the way I was used to, and you can tend to get ignored a little bit in social situations. It was a humbling experience, and I still find it difficult in groups. Jokes go straight over my head.

Share your top three pieces of advice for people thinking about moving to Spain.

The language: If you don’t speak a word of Spanish consider taking a short course before you come. Knowing a few basics, such as how to introduce yourself or order a coffee, will help you feel a little less lost. If you’re coming to teach English try to mix with a few Spanish people or else you’ll end up socialising with your fellow teachers and not learning a word of Spanish. Intercambios are everywhere in Madrid but it’s easy to get taken advantage of by people who really just want a free English lesson. So be strict about getting your time in speaking Spanish too!

The pace of life: A lot of shops still shut between 2pm-5pm and people eat late and stay out until all hours. If you’re not a night person Spain might not be for you. The bureaucracy can drive you mad if you let it. It takes ages to get anything done, but just be patient and try not to get too wound up by it all.

Be realistic: Come with the knowledge that after the initial excitement wears off you’ll probably feel homesick, exhausted from having to speak and understand Spanish all day and at some point the realisation will hit you that wherever you are in the world you still have to work and pay the bills. If you can get through the first couple of months and still love it all will be well.

Check out my DJing Facebook page. I sometimes play out around the bars of Madrid and I’m available for weddings, parties and bar mitzvahs! And come down to the Covent Garden pub in Cuzco and say hi! Great music, artisan beers and cheap copas!