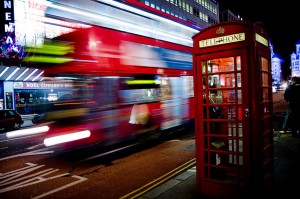 In the third installment of our new series of posts about blending in like a local, we journey to London.

London is one of the top destinations in Europe for both expatriates and tourists. Every year, the city receives millions of tourists and it has many landmarks, attractions and culture for them to see and experience. As an expat in London Town you probably want to feel like a Londoner and distinguish yourself from the thousands of tourists. Below you can find some tips and information on how you can blend in like a local in London.

Touristy places such as Leicester Square (make sure you pronounce it correctly, Lester Square), Covent Garden and Camden Town should preferably be avoided, but can be visited during the weekend and in evenings as Londoners would do. Very often these places are crowded and expensive and they probably don’t have much to offer to you in your daily life anyway.

We are sorry to say, but if you really want to be a Londoner you will have to use the word “sorry” at least a few times a day. Not only when you actually feel like apologising, but also when it takes you longer than one second to get cash for your takeaway coffee (yes, coffee!), or someone bumps into you and it’s not even your fault, for instance. The Brits in general say sorry in all kinds of situations, but considering the large amount of people with whom you share the city, you will be sorry a lot. Sorry! 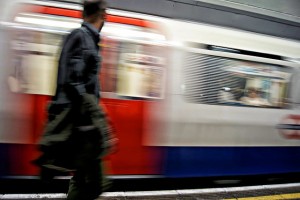 Considering the distances and the amount of road traffic in London, you will probably spend quite a bit of time on the underground, which Londoners call the Tube. In order to make your tube rides go as smoothly as possible, there are some rules you should stick to.

Even though London offers lots of exotic places to eat, traditional British cuisine and English pubs are still beloved by many. Typical meals are fish and chips on Fridays and a Sunday roast with gravy. Indian food is another favourite and Brick Lane in east London is known for its many Indian restaurants.

It is quite common for Londoners to have a pint after work, especially on Fridays. It is also quite common to have lots of pints during the weekend, starting and finishing relatively early compared to other cities in ‘Europe’.  If you order a beer, this will usually be a pint (568 ml) and it won’t have a head – apart from beer, cider is popular. Many people go out in Soho during the weekends, and Clapham, Camden and Shoreditch have an established club scene as well. 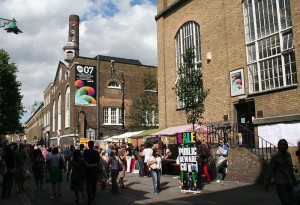 London is a fashion capital. People tend to care about their appearance a lot and many different styles of fashion are represented. Go to the old Truman Brewery in Shoreditch for vintage clothes and walk around the area to see the latest trends. For a shopping centre experience, head to Westfield London in White City, or Westfield Stratford City. The one in Stratford is the largest urban shopping centre in the EU.

Instead of focussing on Central London only, visit other parts of the city. Upcoming areas are Shoreditch and Brixton and if you’re looking for something more exclusive, Mayfair and Chelsea would be good options with lots of posh (expensive) places. Brits tend to find social class important and like to show this, so dress for the type of place you are going.

If you have any other tips for going local in London add them to the comments below.