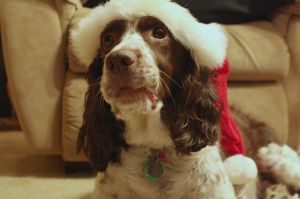 Big family Christmases are fun, but they’re also stressful. For expats that stress is increased by trying to find festive flights with a decent luggage allowance, or alternatively, finding space for the whole extended family when they come to visit. Not to mention finding the ingredients for a perfect Christmas dinner to feed them all.

It’s no wonder some of us would rather not bother with our families at all.

It may sound a little ‘bah humbug’, but according to a recent survey by pet sitting website Trusted Housesitters, 8 out of 10 expats would prefer to forego entertaining the in-laws this Christmas. They would rather spend the festive season with their pets.

In France this figure is higher, with 9 out of 10 expats choosing to snub their in laws in favour of their four legged friends. Expats living in Spain win the prize for being most devoted to their pets, however, with all of the survey respondents saying that they would enjoy Christmas more if they could spend it with their pets instead of fighting over the sprouts with their sister-in-law.

Trusted Housesitters asked their huge expat userbase how they would be treating their pets this Christmas.

The answer is very well indeed.

Site owner Andy Peck didn’t find the results surprising; he already knew that expats are mad about their pets. “A large proportion of the pet sitting assignments that are posted on TrustedHousesitters.com come from expats, so we’ve always known about the close relationship expats have with their pets.”

But even Andy couldn’t predict the lengths that some expats go to to make sure that Christmas will be merry for their furry friends.

Going a little further, 8% of survey respondents will be spending over £50 on a gift for their animals this Christmas, and 8 out of 10 respondents have said that the credit crunch hasn’t put them off spending the same on their pets in 2012 as they spent in 2011.

Great news for pets and for the economy; although perhaps not so great for our in-laws!