Nearly one billion – or one out of seven – people worldwide are migrants. Though the phenomenon of migration is as old as mankind, it still suffers a negative connotation. Many expats find themselves eyed suspiciously, and unqualified immigrants who move countries to improve their living conditions are often seen as a burden to society.

The latest Human Development Report for 2009, released by the United Nations Development Programme (UNDP), comes to a completely different conclusion on migration: According to the reseachers, migration cannnot only enhance human development for those who move, but also for their destination communities and for those who remain at home.

Only a few migrants move to developed countries 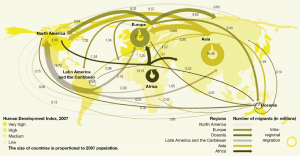 Economic migration is a triple win

Those migrants who move to developed countries mostly do so for socio-economic reasons. The report found those from the poorest countries, on average, experienced a 15-fold increase in income, a doubling of school enrolment rates and a 16-fold reduction in child mortality after moving to a developed country.

However, the migrants themselves are not the only ones to profit from the move. In 2008, migrants sent more than 300 billion US-dollars to their families in their country of origin. The amount of remittances that migrants send home are thus four times greater in volume than development aid from all donor countries combined.

The third winning party are the destination countries receiving migrants. Contrary to commonly held beliefs, migrants typically boost economic output and give more than they take. According to the report immigration generally increases employment in host communities, does not crowd out locals from the job market and improves rates of investment in new businesses and initiatives. Almost all migrants make a contribution to economy and society by paying taxes, expanding the demand for goods, adding to national production and, supporting pension and health care systems, which is especially important for developed countries with an aging population.

Whatever the public perception is, migration is here to stay: “With recovery, many of the same underlying trends that have been driving movement during the past half-century will resurface, attracting more people to move.” says Jeni Klugman, lead author of the report. The UN therefore calls for a “new deal of migration” to lower barriers to movement and improve policies towards those who move.