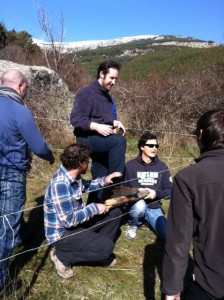 Last Thursday, the Just Landed team had a great day for their annual company conference – and I’ve only just recovered enough to blog about it. The team assembled at 9am in front of the Just Landed office. With a fleet of cars ready to ferry the team to the meetings (thanks to all the designated drivers) we set off to this year’s location: La Pedriza, a little town about an hour from Madrid.Unfortunately, not everyone had the required navigation skills and this resulted in some cars arriving rather late. Luckily, this didn’t conflict with the day’s planning and the team headed off up the mountain.It was a lovely hike up the mountain, following the trail of the river. Since it had been pretty cold the days before, it was very slippery in places but the view and the flora were amazing – especially for the people who have not lived in Spain that long. After about an hour it was time for a little break and a team-building exercise. The game was based on team communication and support. A rope was tightened around three poles and the team had to help each other out over the string using only a wooden board. This of course led to hilarious consequences. After the game, the team descended the mountain to get to the restaurant where a delicious lunch was served – then it was down to business. In the conference room, a mixture of presentations were planned from the various departments of the company. Each department showed what the daily activities included and what the past year looked like. This was very interesting for the employees to see what their colleagues deal with day to day.This year’s event was a complete success. Everyone had a nice time, a beautiful hike, a tasty lunch and an educational afternoon with company presentations.

I’m jealous. I’ve always wanted to go to Spain. And you guys work there? Never take your fortune for granted because there are people like me hankering to be in your shoes for an hour let alone a day!

The conference has little to do with me, but I wish I was there, for the mountains, the fresh air, nature, the lunch, team building, experience sharing.

Hey Alison, It’s so nice to hear your story, as well as those of the other trailing uesosps who have lived (or are living) similar experiences. My bum is currently plonked on the couch, where it has definitely left an imprint over the last few months. I’m looking forward to getting out and taking some dutch lessons next week to get myself out and about. We moved to the south of France 15 months ago, I didn’t speak a word of french and also being quite timid in unfamiliar environments found the experience incredibly isolating. It took 8 months for me to get my carte de sejour in France. By the time it was ready my husband had found a job in Brussels. It was really hard saying goodbye to all the friends we had made and knowing that we had to start all over again.We left France in July and have now been in Belgium for 6 months. I started the registration process 2 days after we arrived, and the local commune tells me that my Belgian carte de sejour will be ready in May if all goes well. In total, I have been dealing with prefectures/maison communales waiting, going through paperwork, ordering translations, apostilles, trying to be nice and lovely to people who don’t have the time of day to deal with my application and feeling completely sub-human since October 2010! I can’t wait to get my ID card here and actually start a proper life! No more living in limbo I have so much respect for people who can get through it. It is so nice to hear that so many people here have found light at the end of the tunnel so I will be sure to keep my chin up and hope that one day I wil get there too Thanks for posting your experience, I’m just discovering your blog (and loving it!) I’m going to try and convince the hubby to try out some of these Brussels restaurants you’ve recommended! Think I might hit the cash & carry store to test out my Indian cooking skills too. I have been learning all about how to be a good wife something I never dreamed of in my career-driven pre-expat life. I now spend my time crocheting, cooking, cleaning a retired old nanna way before my time! AlisonPS I have to say that I am completely jealous you’ve had the cats and the saint bernard to share this experience with!