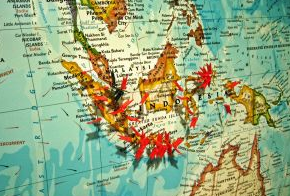 Just Landed has launched the latest in our series of expat guides, for anyone interested in living in Indonesia. With you every step of the way, it offers information, guidance and tips on everything from visas & permits to health, housing and education.

Whether you’re in the process of packing up and moving overseas, or just considering a move to warmer climes, have a look and see what Indonesia can offer you as an expat.

With a growing economy, already Southeast Asia’s largest, and a popular higher education destination, Indonesia is making a place for itself on potential expats’ maps. Regulations for visas and residency permits may be confusing at first, and have recently been tightened up, but don’t let that put you off. Check out our guide to visas and permits and you’re on your way.

Made up of over 17,000 islands, Indonesia is a country diverse in geography, culture, religion, language and people. For many expats, a move to Indonesia may come with a dose of culture shock, and many live in areas or buildings where the majority of the community are fellow expatriates.

Cities such as the capital Jakarta are popular destinations, and trade, financial or service sectors will likely provide the most opportunities for expat job seekers. Meanwhile, Indonesia’s cost of living varies between rural and urban areas, but expats will likely find an enticing relationship between salaries and prices, meaning a weekend on the beaches of Bali may be closer in reach.

Our guide is here to help you when moving to, and living in, Indonesia, but don’t forget to ask questions and get to know other expats in our Indonesia forum.