Mardi Gras – a mix of traditions, religion and carnival

The story behind it all…

People all around the world come together and celebrate a very well-known traditional day before Ash Wednesday called Mardi Gras, which refers to “Fat Tuesday” in French.

Similar traditions date back to French Renaissance, Christian Era and all the way back to Ancient Rome. Regardless of its religious connotations, it is a great day to celebrate with parades, parties and delicious food. Namely, regarding the Roman Catholic and Eastern Orthodox traditions, Mardi Gras is considered to be the last chance for the faithful to eat meat and other rich foods, hence the name “Fat Tuesday”. Following this day of indulgence is the penitential season of Lent, which begins on Ash Wednesday and continues until Easter Sunday. Mardi Gras is always celebrated before Easter and since it’s a moveable feast, it falls roughly between February 3 and March 9 each year.

While you are scoffing your delicious pancakes or enjoying the festivities, you may be wondering how Mardi Gras is celebrated in other cultures. Well fear not, this is what Just Landed is here for.

Focusing on carnivals – where should you celebrate?

Here you can find a list of the most famous and extravagant carnivals for Mardi Gras across the world: 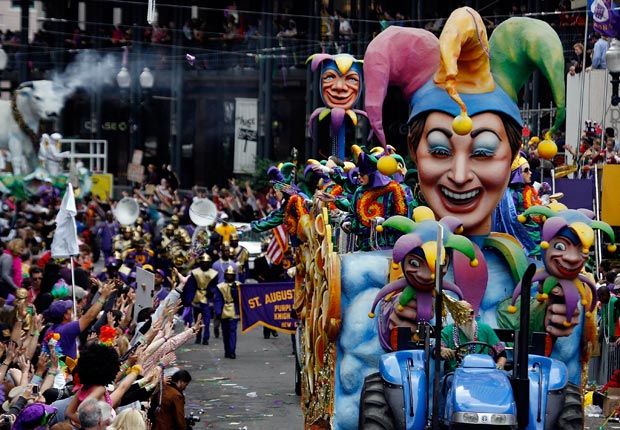 If you’re based in the United States – New Orleans is the place to be! During the festivities the streets are filled with colourful and over-the-top rolling floats, marching bands as well as people behind masks and costumes in the traditional colors of purple, green and gold. The whole city is shut down so you can embrace your inner party animal. And do not forget about the King Cake – a delicious cinnamon roll-style pasty which contains a tiny plastic trinket symbolizing luck.

Want to experience the American dream? Click here for more information about living in the United States. 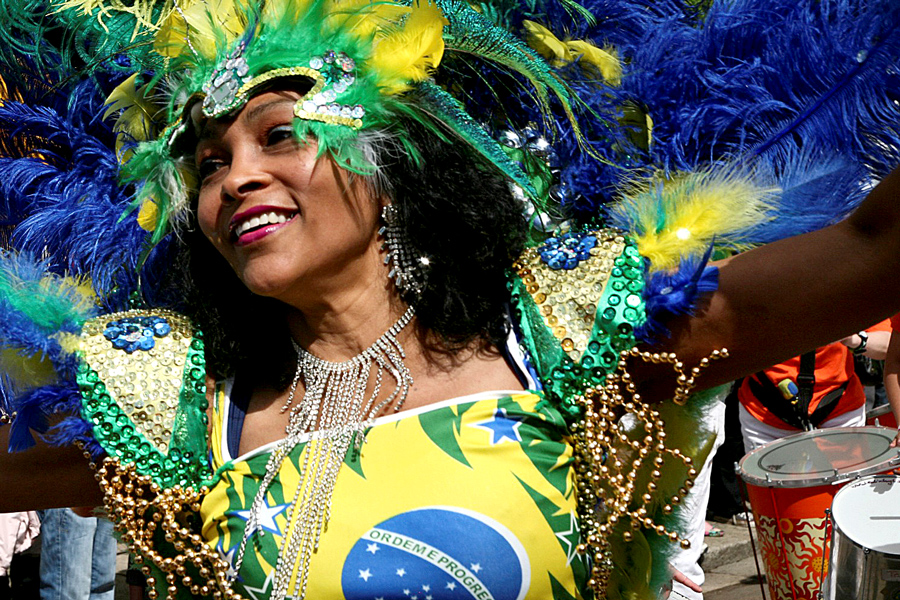 Where else if not in Rio de Janeiro?  Carnival is the most popular holiday in Brazil which attracts more than 2 million locals and tourists to enjoy the symbolic brazilian samba which gives spirited and ecstatic vibes to the streets. Brazilians have reworked feijoada, with strong Portuguese influences, and given it their own authentic touch. Why not to cheer the battling samba schools while enjoying a hearty meat-and-bean stew. 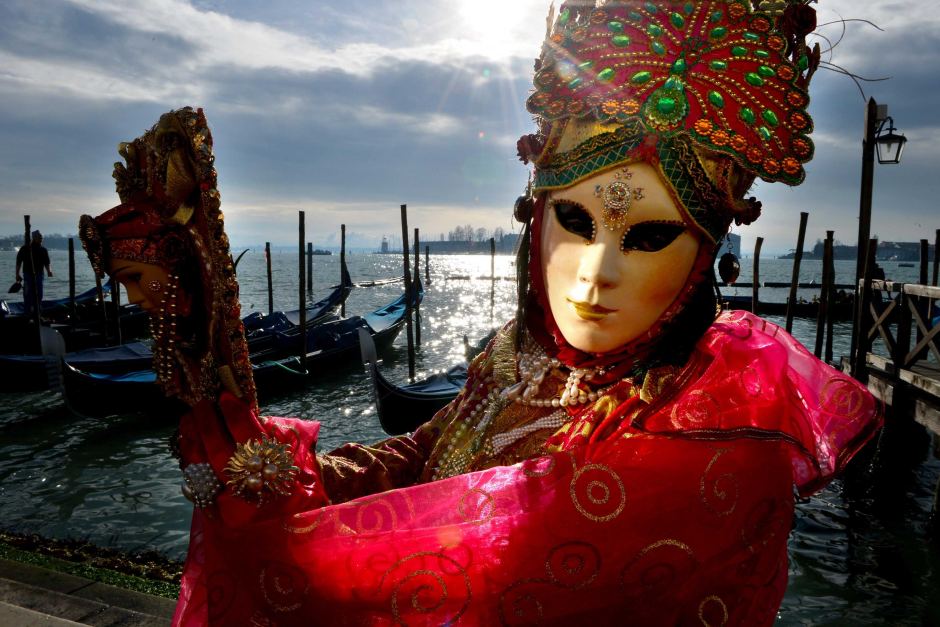 Go and visit Italy – the birthplace of carnivals. If you want an excuse to play dress-up, Venice is the place to be. It is well known for its elegant and enchanting masquerade balls, theatre performances, candlelit water parades as well as extravagantly costumed revellers on the streets. On the culinary side you can try frittelle (filled with sweet and savory doughnuts) and galani (fried pastry).

Thinking of moving to Italy? Click here for the country guide 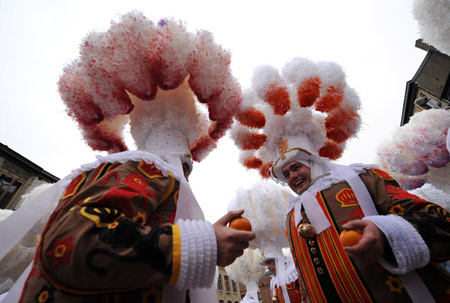 If you are looking to experience something especially traditional, you must visit Belgium where Mardi Gras is turned into a folkloric event. Another event recognized by UNESCO focuses on Gilles (local men wearing wax masks and wooden clogs in the colour pattern of black, red and yellow). They gather on a square and swap the masks for large ostrich-feather headdresses and throw blood oranges into the crowd, representing fertility. Also, a special breakfast – oysters and champagne is very common. 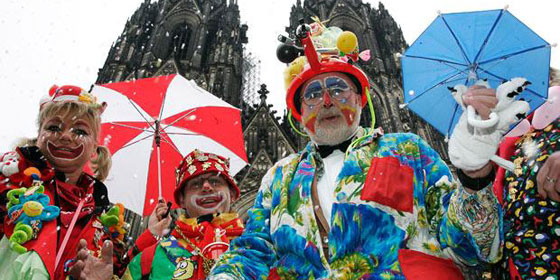 The Karneval or Fastnacht in Germany, Cologne has the largest celebrations where the concept of prinz (prince), jungfrau (virgin) and bauer (farmer) have existed since 1883. Those playing these roles pay for the privileges, and the prince hosts and leads the festivities throughout the week. If you’re partial to a bit of German culinary delights, you are in for a treat with cold frikadellen, goulash soup, deep fried Karneval treats (donuts), pudding, and of course, mettigel (hedgehog out of raw pork). 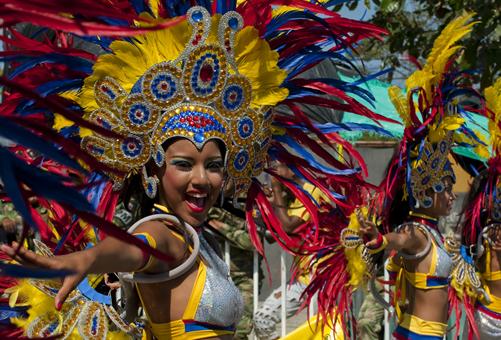 You definitely should take a look at the Barranquilla carnival which is not only the second-largest carnival in the world but also it has been named as a Masterpiece of the Oral and Intangible Heritage of Humanity by UNESCO. Celebrations begin on a saturday before Ash Wednesday with a Battle of the Flowers and continue with street parties predominantly cumbia as the background music. A typical colombian dish includes pescado (whole fish), coconut rice, salad and patacones (smashed and fried banana).

Interested in having an expat experience in Colombia? Read more about the country here 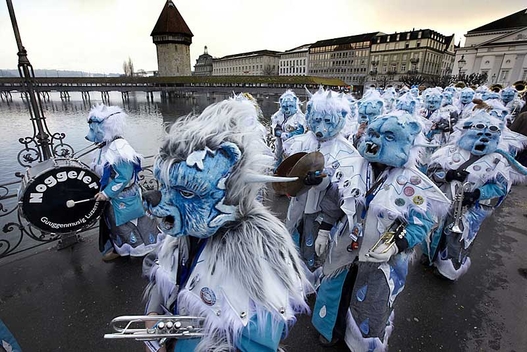 Interested in extravagant parades? Go and visit Lucerne Carnival in Switzerland where the main focus is on different parades. While walking down the narrow streets, you can notice strange characters with intriguing masks and costumes who are marching with Guggenmusigen (musicians). Don’t miss the 3 highlights of the carnival: The Fritschi Parade, The Wey Parade and Monstercorso Parade. Traditional food includes Luzerner Chügelipastete, fried desserts and greasy sausages.

Next destination – Switzerland? Find out more about the country here 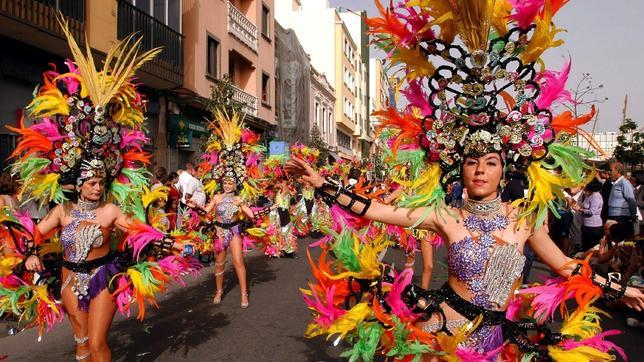 Do you want to celebrate Mardi Gras on a beautiful island? Las Palmas de Gran Canaria in Spain, Canary Islands is the place to go! Spaniards have taken the carnival festivities right to the beach where you can enjoy the extravagant Queen Gala and the famous Drag Queen Gala. You have the opportunity to join the 6 km long parade “Cabalgata” and also try delicious and traditional Canary nougat.

Planning to move to a beautiful island? Find more information about Spain here 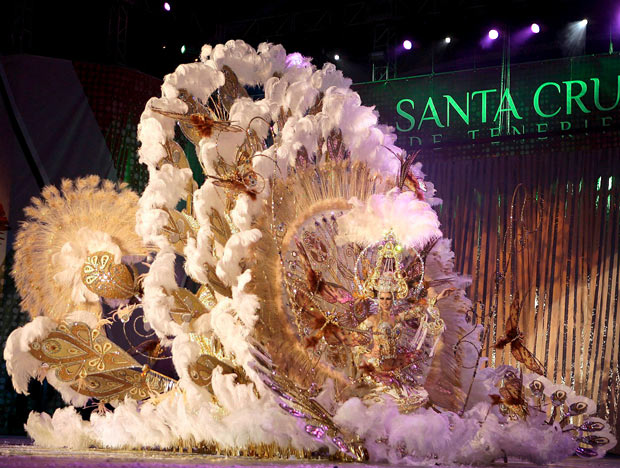 Another must-see carnival takes place in Santa Cruz, Tenerife in Canary Islands which was declared as the “Fiesta of International Tourist Interest” in 1980. Each year the Gala to elect the Santa Cruz de Tenerife Carnival Queen is the most highlighted event. During the daytime the streets are filled with people celebrating and enjoying live performances by murgas, comparsas, rondallas, different musical groups and more.

Thinking of Canary Islands? Get more information about living in Spain from our country guide

We hope you enjoyed our whirlwind tour of the Mardi Gras celebrations around the world. Before you start thinking about what you may give up for lent, take a moment to really reward yourself, and indulge in some “Fat Tuesday” treats. From frikadellen to fritelle, you can celebrate Mardi Gras in style!

Did we miss your country?
If you know of any more Mardi Gras celebrations, we want to hear about it!