Christmas traditions you never knew about 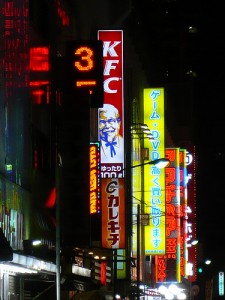 First off, Christmas is not a religiously observed festival in Japan, nor is 25th December a national holiday. But thanks to a wildly popular advertising campaign during the 1970s, Christmas dinner has become a national institution – at KFC. So popular is the American fast food chain at Christmas that reservations for buckets of fried chicken are taken months in advance. According to the company’s Japanese website, the tradition began over thirty years ago when a western expat, whose hunt for a Christmas turkey had ended fruitless, saw KFC as providing the next best alternative. The store manger got wind of this, and upon informing his bosses, the “Kurisumasu ni wa kentakkii!” (Kentucky for Christmas!) advertising campaign was born. The country has never looked back – and nor has Colonel Sanders, who is now Japan’s de facto Santa Claus.

Despite its geographical distance from Europe, Christmas traditions brought to South Africa during the country’s colonial era have always retained their importance. On the whole, it’s a pretty similar affair to Christmas anywhere in Europe (except that it happens in the middle of summer, of course); though there is one especially creepy Christmas legend: that of the little boy Danny who was brutally murdered by his own grandmother for eating all the Christmas cookies before Santa Claus arrived. The idea is that in telling kids the story, they’ll be put off being greedy, thus creating a festive atmosphere of loving and sharing that cannot fail to flourish…

Christmas in Mexico has, in many ways, become a fully Americanised affair with turkey on the dinner table, an ice rink dominating Mexico City’s main square and pine trees for sale flooding into local markets. The mariachis on the street even play carols these days.

But despite the invasive cultural influence from Mexico’s Christmas-crazy northern neighbour, a few genuinely Mexican festive customs persist. Nine days before Christmas, every town holds a posada procession with blindfolded piñata bashing and on 6th January the Three Kings arrive on horseback to dish out presents to the town’s younger residents. In Oaxaca, there’s the annual radish carving competition on 23rd December where residents vie to create the most impressive vegetable sculptures, including miniature cathedrals and mythological battle scenes. The winner’s grand prize? A prime spot in the local paper.

One of the more controversial, and to many outsiders, very odd, European traditions is that of Holland’s ‘Zwarte Piet’ (Black Pete). Sinterklaas (Saint Nicholas) is accompanied by a team of little servants (all of whom, somewhat questionably, are black) who are tasked with distributing sweets to good children. As legend has it, those who have been naughty are kidnapped by the Zwarte Piets, thrown into sacks and taken to Sinterklaas’ home in Spain. The story is still re-enacted all over the country with men literally blacking up their faces and donning afro wigs to accompany Saint Nicholas in giving out gifts and sweets to local children.

The tradition has drawn increasing criticism in recent years, both in the Netherlands and abroad, for its racist connotations (it was first created when Holland was still very much involved in the slave trade), but remains steadfastly popular among the general Dutch populace. 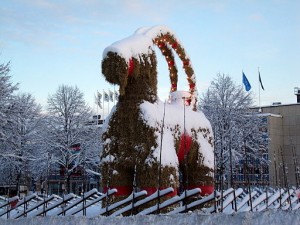 The yule goat (Julbocken) is ubiquitous during the festive season in Sweden: little straw ornaments hang from Christmas trees in every Swede’s home, while giant versions stand proudly in the centres of towns and cities all over the country. It’s popularly seen as having historical pagan associations – the Norse god Thor’s flying chariot was drawn by two goats which are thought by many to be the origin of the tradition.

The history of one town’s giant goat took a slightly more anarchic turn during the 1960s in the small city of Gävle, where for over forty years now the goat has been burned down by vandals almost every year. Though for many, the burning of the goat has become a kind of tradition in its own right, the local authorities take a rather different view of the matter.

Only a handful of the goat’s arsonists have ever been caught, and those remaining are a particularly dedicated bunch. In an attempt to clamp down, the local council recently posted 24-hour security guards in the goat’s vicinity. One especially frigid night, the guards nipped into a nearby bar for a quick winter warmer – before they’d even taken a sip, the goat was in flames. This year, the council has rather intelligently flameproofed the straw used to build the goat. It remains to be seen whether Gävle’s pyromaniac community will finally be defeated.

Do you live in these countries? Tell us what you do for Christmas in the comments below!