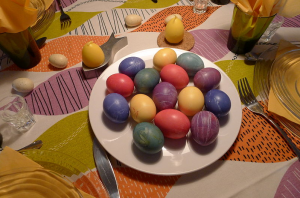 Easter is happily celebrated all around the world in many different ways. It is chiefly considered a Christian holiday but it has always been a traditional way of welcoming spring (sometimes considered the New Year in ancient pagan times).

The word itself, Easter, is related to the German word for Easter, Ostern. This in turn developed from the old English word Ēastre or Ēostre meaning “the month of opening”.

One of the most well-known Easter traditions, decorating eggs, stems from Paganism. The eggs come from the time when Egyptians, and also Romans, would offer them in spring as a symbol of life and rebirth.

The first Christians, the Copts, used to paint the eggs red to symbolise the blood of Christ, a tradition that many orthodox Christians continue to this day. In other countries, the eggs are made of chocolate and sugar, and offered to children.

Aside from exchanging eggs, there are some very interesting Easter traditions around the world, from the very passionate celebrations in Spain or the Philippines, to the fun water fights in Poland. Let’s take a look at some of them.

On the Thursday or Saturday before Easter, little girls dress up as witches, in headscarves and old clothes. They then knock at people’s doors and exchange drawings and pictures for treats. The tradition is said to come from the belief that witches would fly from a mountain in Germany to cavort with Satan on the Thursday before Easter so many Swedes light bonfires and fireworks to scare them away.

On Good Friday, the most devoted Catholics participate in a reenactment of the crucifixion of Jesus. Some people play Romans accompanying the penitents as they walk towards “Calvary”. The volunteers carry the cross the same way Jesus did, and others whip themselves as they walk. The participants are then nailed or tied to the cross. Obviously, they are not left there to die but they are displayed there for some time with a wooden shelf to stand on. 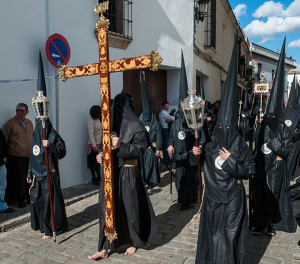 One of the most famous holidays in Spain is celebrated in many places with Procesiones (processions). Different local Catholic confraternities (groups of lay-people who promote the work of the church) carry a large, wooden statue representing a part of the life of Jesus over their shoulders each day during the Holy Week.

They are surrounded by other members of the confraternity (nazarenos) wearing long tunics and pointy hats and, depending on the procession, women in traditional mourning clothes along with dramatic music played live.

In some places in Greece on Easter Sunday night, a figure of Judas that was hanged on the Thursday before is burnt on a bonfire. This tradition takes place in other countries too, sometimes accompanied by fireworks. Burning Judas used to be a common tradition in Europe but it got lost during the ages. Some Latin American countries still follow this tradition, though the exact days involved vary from country to country.

Poland – get your water pistol

Other than painting eggs, a curious Polish tradition is to have a water fight, especially when the weather is not very cold. During śmigus-dyngus (Wet Monday), it used to be a custom to sprinkle young women with perfumed water. Nowadays it has evolved into massive water battles in the street that include men and women.