Etiquette on the world’s subways 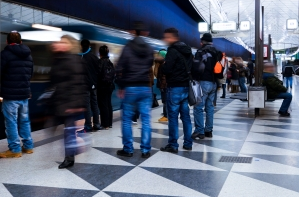 Millions worldwide start their days by taking the subway, commuting or descending to their city’s underground.

Whatever they call them, one thing is true globally about subterranean railways: they’re not only subject to overcrowding and the occasional signal failure, but, worse still, they’re a social minefield, where not playing by the (at times) baffling rules, can cause a lot of awkwardness, especially for new expats. Here, Expat Explorer, brought to you by HSBC Expat looks at the subway etiquette from around the world.

In India, for example, pushing to get out of a crowded carriage is normal and accepted – asking politely could lead to missing your stop. In New York, definitely don’t keep your feet on the seats. In 2011, over 7,000 riders were fined for the discourtesy. For those in London, standing bemused in the middle of the escalator step could be the source of much aggravation for rushed Londoners. When it comes to taking the underground, the etiquette is “keep right” and leave the left side free for overtakers.

Across the world, expats in China or Hong Kong may benefit for better-connected phone networks and wi-fi enabled carriages. However, this also means that expats should be prepared to hear a lot of one-sided conversations of other commuters.

Elsewhere in Asia like Japan or Taiwan for example, pink stickers in carriages indicate female-only carriages during rush hour until 9.30am. This makes it a man-free zone so gentlemen who fancy their chances during restricted times will not be welcomed kindly.

One thing that does seem to be universal though, is subway humour. Cracking a joke to the whole carriage will largely not be accepted but there’s plenty of scope for satire- especially when it comes to etiquette. Those newly arrived to the UK may be relieved to know that stickers reading “No eye contact. Penalty £200” or “Peak hours may necessitate you let other people sit on your lap” aren’t official communications.

Etiquette posters from Queensland, Australia have also been doctored to create risqué but hilarious memes online. Some subway-related blogs have been used for protest too – encouraging men not to take such a wide sitting stance, or berating those who decide it’s a good idea to sit on the floor with their backs to the door.

Cultural difference extends to self-entertainment too. Expats in Beijing may notice commuters fondling walnuts to exercise their hands – a more unique way of occupying the journey than listening to the ubiquitous buskers who spring up worldwide regardless of transport company rules or burying your head in newspaper or tablet.

What strange customs have you observed since making the move abroad? Let us know in the comment below or by tweeting @expatexplorer.