“Dealing with different cultures broadens your understanding of the world” 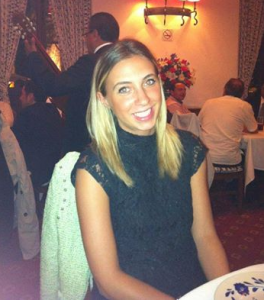 “Going abroad is just an experience that is going to make you more mature.”

Andreina Pappalardo has just turned 22 and she has lived in several countries around Europe. We interviewed her about her experience studying and living abroad.

Andreina, tell us about yourself.

I  moved to Scotland alone to start a law degree because I wanted to study abroad in another language, however I only stayed in Scotland for one year.

After that, I decided to move to London and study a much broader degree, European Studies with Spanish at Royal Holloway, University of London. I am currently in my third year, which I am spending in Madrid as an Erasmus student. My parents and brother live in Italy, in Modena, where I grew up. My mom is Mexican and all of her family lives in Mexico. My dad is Italian.

Why did you decide to study abroad?

I decided to go abroad because I wanted to move away from Italy, try other cultures, and meet people from other nationalities. I always thought by understanding and dealing with different cultures, you can broaden your understanding of the world. Italy was not for me anymore. I had the opportunity to study in a foreign university and the UK has always been a place that appeals to me.

When you left Italy, you moved to Paisley (Scotland), what were the main challenges for you there?

The main challenge in Scotland was the language barrier. I knew English when I got to Scotland, but the problem for me was the Scottish accent. The Scottish people have a very strong accent which was very difficult for me to understand. I started studying law and I was the only foreign student in my class.

What are the main cultural differences between England and Scotland?

English people are lovely people. They are always willing to help you but at the same time, they are very focused on their careers and their own lives. English students are not used to meeting new people from different nationalities. It is more like ‘’ Oh okay, there’s foreign people in our country’’.

Scottish people are not the same as English people. My first impression of the Scottish was that they are less friendly. If you get to know Scottish people well, you will understand that they are the very helpful. They are very friendly and do everything they can to help you. They have this admiration for people coming from abroad which I thought it was very strange, because I always looked at Scots and English people as belonging to the same culture. In the end, it is completely different cultures and ways of life.

A few weeks ago you moved to Spain, how did you find adjusting to the Spanish way of life?

I was not scared about moving to Madrid. I knew it was going to be the same as before. Starting a new life and making new friends. I knew I had done it before in a country where the language was not one of my main strengths. Spanish is one of my mother tongues so I knew it was going to be easier for me to adapt. Spanish people just do everything for you. They are very friendly and just want to make your stay in Spain an amazing experience.

I’ve never had culture shock. Sometimes I can’t understand why certain things are done in a particular way, as I would do things differently in my home country.

I’ve also never really experienced reverse culture shock, however, sometimes when I go back to Italy, I feel out of place. Not because my culture has changed, but just because I’ve been out of the country for a long time. Sometimes I go back home and I feel that my life is not the same anymore. I have absorbed a lot of the cultural influence from the countries I have lived in. I’m definitely changed and I think I’m more mature than before. Experiencing all the lifestyle changes made me become another person, I see things from a different perspective than before.

“I decided to go abroad because, I wanted to try other cultures and meet people from other nationalities.”

Do you have any advice for those who want to live abroad?

Never be shy! However, I understand that the first time abroad is difficult since everything is new. You have to adapt, start your life from scratch and there’s many things that might scare you. Do everything you can to have a good time and don’t be afraid of anything. Going abroad is just an experience that is going to make you more mature. It’s going to make you grow as a person. Let yourself go and remember, a lot of people are in the same position and there are always people who are willing to help you. It is just a matter of being positive and keeping calm!