The real nightmares before Christmas 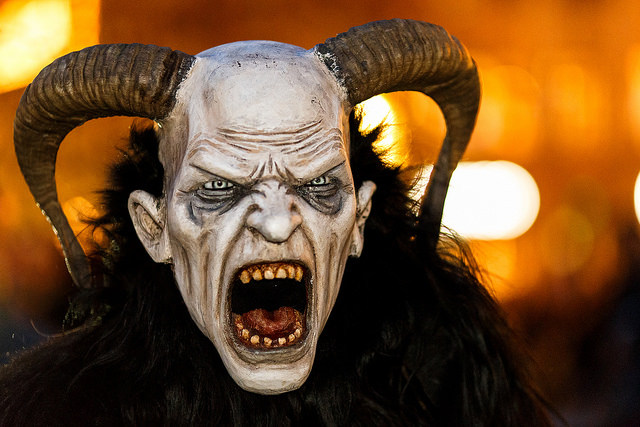 When thinking of Austria in wintertime, what usually comes to mind are snowy mountains, a fire crackling in an idyllic cottage and Christmas markets… I hate to break it to you, but this is not the case.

Having lived in Austria for the past eight years, memories of wintertime in that beautiful little country are enough to send a shiver down my spine. This is not because I am particularly afraid of being cold all the time (I’m not!) but because of what happens on the evening of December 5th.

Huge, dreadful creatures, disguised with sinister, carved, wooden masks with horns and heavy, furred coats wearing cowbells on their belts suddenly storm through the village, turning a peaceful winter’s night into a real-life nightmare. They chase and whip unsuspecting passers-by with their wickers (if you’re lucky – I’ve seen some carrying an axe!)

If you manage to NOT have a heart attack and dare to crawl out from your hiding place, you will discover that what you just have experienced was not only the manifestation of your worst childhood fears but also a very old tradition which has been fostered for hundreds of years.

The devil-like creature is called Krampus and he is St. Nicholas’ assistant. While St. Nicholas traditionally hands out presents to the well-behaved children, Krampus is said to be responsible for punishing the naughty kids by sticking them into his bag and hitting them with his birch. At Christmas time, people dress up as the gruesome creature and take part in the so-called Krampus-run. For young men, this is your chance to prove your courage and strength by running alongside (and even wrestling!) the demons.

In many countries Saint Nicholas is accompanied by various companions to motivate children to be on their best behaviour. In Germany they have Knecht Ruprecht. Knecht Ruprecht dates back to the late Middle Ages. He usually wears either a brown or black robe, has a long beard, and carries a bag of ashes and a basket containing switches and treats. Children who have been good receive treats from him, while those who have misbehaved during the year receive a piece of coal. Parents threaten their children with the idea that if they misbehave, Ruprecht would take them with him! 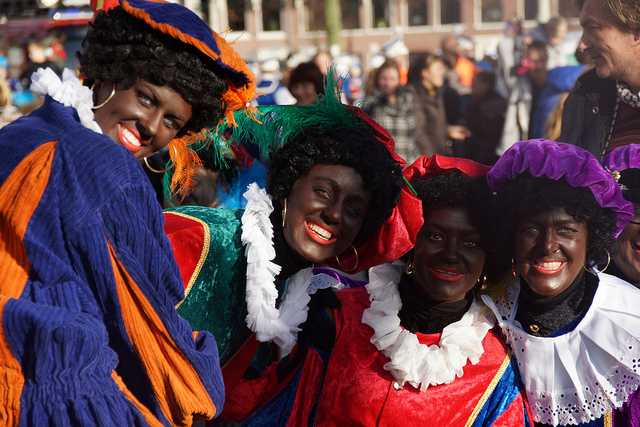 In the Netherlands Saint Nicholas’ sidekick is called Zwarte Piet (Black Peter). He’s perceived as a fun and mischievous character who climbs down the chimney to deliver gifts and throws sweets in the air.

In earlier times Black Peter was said to kidnap naughty children and whisk them away to his home in Spain. However, the tradition of Zwarte Piet has been controversial for the last couple of years and has sparked a national debate which the UN has become involved in.

So what’s so controversial about him? Men and women who play Zwarte Piet paint their faces black or brown, red lips and wear fuzzy black wigs. Most Dutch people would explain that Zwarte Piet is black because he’d come down the chimney and is covered in soot. However, protesters, among them Dutch citizens of Caribbean ancestry, find this portrayal offensive.

Coming soon in a cinema near you!

There certainly are some strange traditions out there; the Krampus and Ruprecht are more reminiscent of Tim Burton’s “The Nightmare Before Christmas” than you may be used to. Interestingly, these lesser-known creatures and myths were snatched up by Hollywood and will soon be terrifying generations of children from the big screen, as well as in real life – what a nightmare!

Are there any scary Christmas traditions that you have discovered? Share them with us!